HILL AIR FORCE BASE, Utah – The Energy Office at Hill Air Force Base earned high honors recently when the U.S. Department of Energy awarded the installation with the 2019 Federal Energy and Water Management Award. The annual award recognizes outstanding contributions in the areas of energy efficiency, water conservation and the use of renewable energy technologies at federal facilities.

Nick King, base energy and utility manager, said the award is a validation of the installation’s efforts underway with a $91.1 million, 23-year-term Energy Savings Performance Contract awarded in April 2018 to Energy Systems Group (ESG).

ESPCs allow federal agencies, such as the Air Force, to partner with energy service companies to provide energy savings, resiliency and facility improvements with no up-front capital costs to the government or special Congressional appropriations.

“There are Department of Defense directives that guide us to reduce our energy consumption, so this will go a long way to us actually meeting those requirements,” King said. “This is an excellent avenue for us to get some new infrastructure and equipment, which has always been a challenge for us to fund, but without having to get money up front.”

In addition to the cost benefits, the energy conservation projects in progress at Hill AFB are contributing to the Air Force’s goal to make installations more energy resilient by relying less on energy sources outside the fence line in order to sustain its missions.

The ESPC at Hill AFB is being used to fund a comprehensive project throughout the base with an allocation of $42 million in infrastructure upgrades to 328 buildings across more than 9 million square feet.

Some energy conservation improvements have included new LED lighting systems in 166 buildings, as well as upgrades to the steam distribution systems in 162 buildings, compressed air systems and ventilation and control systems across the base.

In total, the project improvements are expected to reduce annual energy consumption at Hill AFB by 9% and energy costs by 13%, while increasing the installation’s distributed and renewable energy portfolio by 30%. 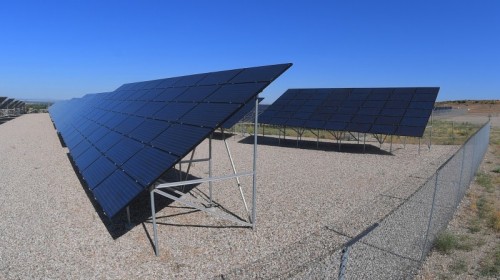 Construction of a new 3.55-megawatt solar array was completed in June 2019 at Hill Air Force Base, Utah. The array feeds directly into the electric grid, adding to the base's existing renewable energy production capability and was one of several projects that contributed to the installation’s energy office earning the 2019 Federal Energy and Water Management Award from the U.S. Department of Energy.