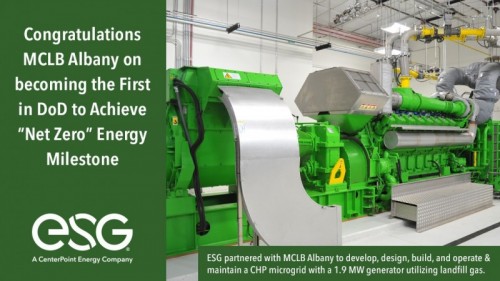 Marine Corps Logistics Base (MCLB) Albany in Georgia is now an electrically “Net Zero” base. It is the first installation in the Department of Defense to meet this energy-efficiency milestone. Achieving “Net Zero” means producing, from renewable “green” energy sources, as much electricity on or near the installation as is used over the course of a year. Energy Systems Group (ESG) congratulates MCLB Albany for this extraordinary achievement!

ESG partnered with MCLB Albany to develop, design, build, and operate and maintain a combined heat and power (CHP) microgrid with a 1.9 megawatt (MW) electric generator utilizing landfill gas from the nearby Doughtery County landfill. Commissioned in 2011, the facility also houses a heat recovery steam generator, which utilizes the exhaust heat from the generator to produce steam. The steam produced by the facility is enough to carry the load for MCLB Albany’s entire maintenance center for the majority of the year.

The facility increases MCLB’s energy security, reliability, and resilience with its capability to operate on 100% natural gas in the event of an electrical outage. The facility’s ability to operate in an emergency was demonstrated in 2017 when a tornado passed through the area resulting in a loss of utility power. The generator operated uninterrupted in island mode for approximately three days, keeping electricity flowing to mission-critical facilities, before utility power was restored.