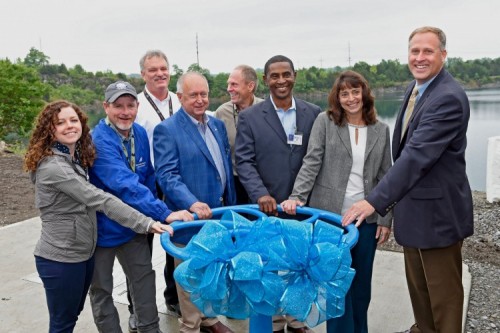 Nashville, Tenn. - The world’s largest aerospace professional society, the American Institute of Aeronautics and Astronautics (AIAA) recently awarded the Nashville International Airport the 2019 Jay Hollingsworth Speas Airport Award for its Geothermal Lake Plate Cooling System. Co-sponsored by the AIAA, the American Association of Airport Executives, and the Airport Consultants Council, the award recognizes the airport's innovative approach to turning an abandoned rock quarry into a source for energy, environmental conservation, and cost savings.

The Metropolitan Nashville Airport Authority (MNAA) partnered with Energy Systems Group (ESG) to develop an innovative use for the former Hoover rock quarry located on the airport’s property. This geothermal lake plate cooling system project reduced the airport’s chilled water energy consumption from February to May 2016 by more than 50 percent.

The project was designed to reduce the airport’s electricity usage by 6,000 kilowatts of peak demand and result in annual savings of 1.3 million kilowatt hours. The MNAA is projected to save more than $430,000 per year in utility savings. In addition, the project allows for the use of quarry water for landscape irrigation resulting in savings of more than 30 million gallons of potable water per year.

The MNAA has received multiple awards for the project including the 2017 Envision Silver Award for Sustainable Infrastructure - Water Source Geothermal Project and the 2016 Environmental Achievement Award in the Special/Innovative Projects category from the Airports Council International-North America. The MNAA was also awarded the 2015 Governor’s Environmental Stewardship Award in the Sustainable Performance category by the Tennessee Department of Environment and Conservation, recognizing its programs and initiatives that improve and protect the environment and natural resources.